She was abandoned out in the open as a puppy, but after being rescued she found a forever home

She was abandoned out in the open as a puppy, but after being rescued she found a forever home

Pecana was barely a puppy when she arrived at Territorio. She was part of a litter of seven mutts who were abandoned out in the open at our farm, exposed to the sun, rain, cold and hunger. Fortunately, we had the opportunity to find them alive and rescue them, since otherwise the story of this furry little girl and her brothers would have been very different.

The rescue happened one day in which, thanks to donations, we were able to finally hire someone to cut the tall grass from part of our farm. Suddenly the people cutting the grass began to hear barks from several puppies, so our collaborators interrupted their work to try and figure out where the sound was coming from. This is how they found this furry litter, they had been abandoned in that tall grass, in the middle of the pasture.

All the little ones were in good condition and they were all brown, so we named the litter as “The Seeds” and gave them each a type of seed as a name: Sunflower, Peanut, Pecan, Cashew, among others.

A few days later we posted “The Seeds” were up for adoption on our social media, and we were able to find homes for all of them, such is the case of Pecana, who became part of Karina Varela and Michael Calderón’s family. 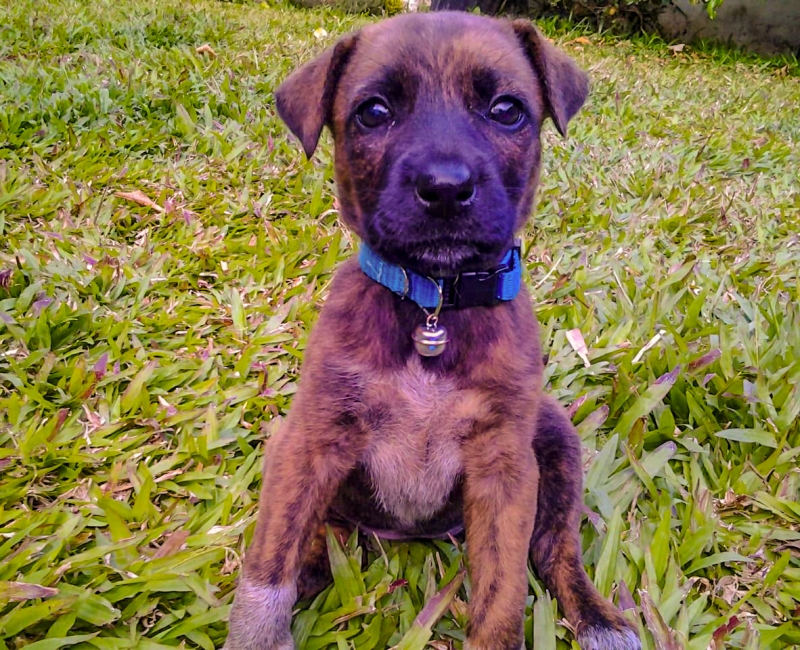 She was successfully adopted on November 22nd, 2014, with the idea of, not only giving a home to a stray puppy, but for it to become a companion for Luna, a dog that Karina had already had for 12 years.

“We had a Cocker Spaniel that was given to me as a present, she was old, she only ate and slept, it felt as if we did not have a dog at all. When I saw the ad about The Seeds I got in touch with Territorio and we took Luna to choose a puppy that had a compatible energy with her, and that’s how we chose Pecana”, explained Karina.

Today, this mutt is unrecognizable, that little seed grew as much as the love this family had to offer her. Karina and Michael decided to keep the name Pecana as her middle name, and named her Stella Pecana. According to her family, since they already had a “Moon” (Luna) at home, they wanted to name her Stella, which means “star” in Italian, so they would have a moon and a star at home.

Pecana’s arrival to their household, transformed not only Karina and Michael’s lives, whom by the way, had never adopted before, but transformed Luna’s as well: “The Vet told us that normally when a puppy arrives into an older dog’s home, it brings new energy, and Stella Pecana effectively re activated Luna again, making her run and play. She had no energy prior to that, she possibly lived four more years thanks to her new companion, until she passed away in January this year”, Michael told us. 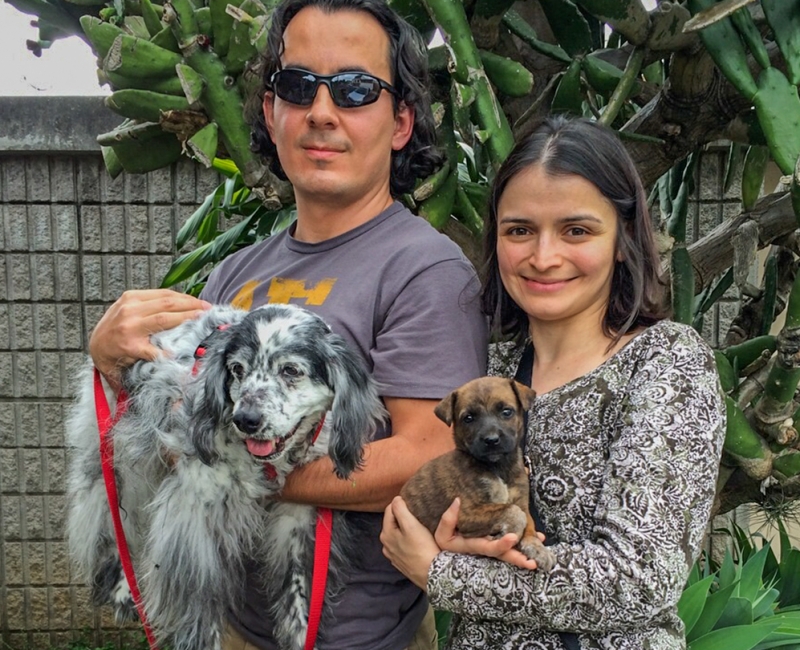 Moreover, he pointed out that Stella was taught to brush her teeth since she was a puppy and the first thing she learned was to sit down: “She learned to sit down within the first week, she was very anxious at feeding time, so we had to teach her to calm down by sitting down. We wouldn’t feed her until she was calm, because Luna was taught to sit down and wait until her food was served, and would not eat until we told her to, so we had to teach them equally, otherwise Stella would try to eat Luna’s food as well.”

Her humans say that she has always been a very docile and very calm dog, but what surprised them the most was that Stella did not stop growing.

“When we adopted her, she was a tiny little thing, she could fit in the palm of my hand. Being a mutt, one does not know what type of breed they really are, and how much more they’re going to grow, you have to be prepared for that. The truth is, it was an adventure for us to watch her grow and grow, because she did not stop growing and she was very small when we got her”, Karina recalled.

Although Stella is normally very calm, she can also be a naughty girl. When she was a little puppy, her family left her home alone one day, so she took advantage of it and climbed onto the sofa, from there she went to the chair, until she reached the table, where she began circling and knocking things off. Stella would knock stuff down, while Luna would receive it on the floor. According to Karina, Luna was the intellectual author because she was the oldest, and it was her who would send Stella to do these naughty tricks.

In addition, they recalled that in the beginning, Stella liked chewing on plants and tearing them, and then they realized that Luna, who had never found any interest in plants, was also chewing on them and destroying them like Stella. No doubt they managed to live together and enjoy many adventures together. 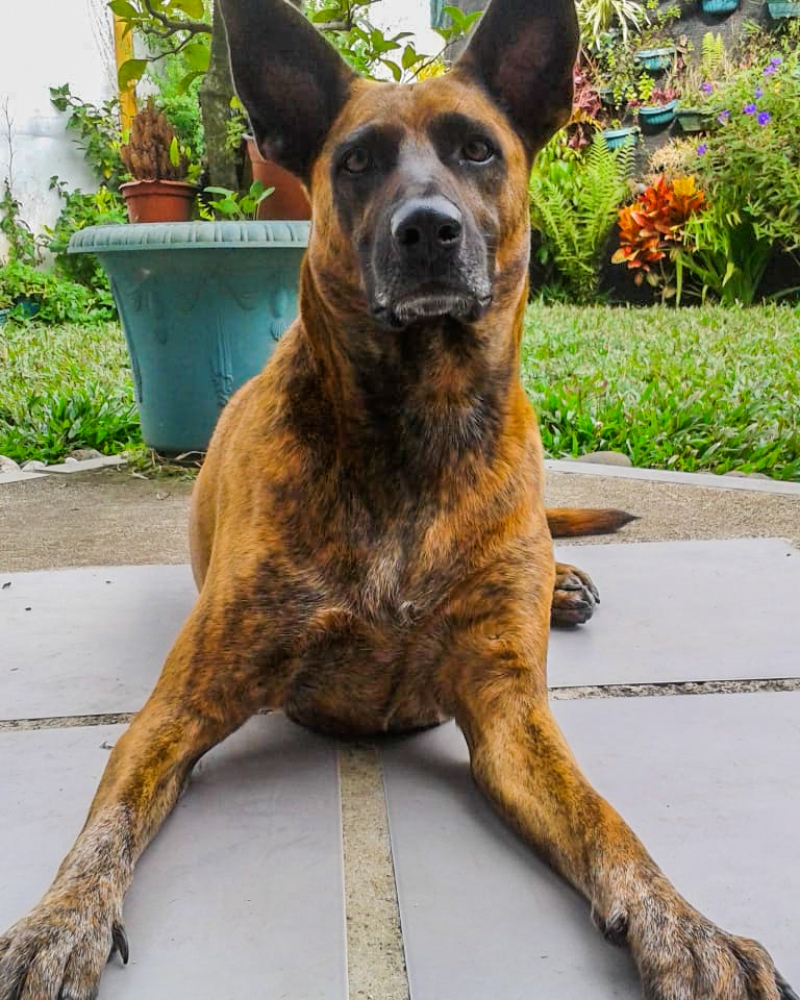 Today, Stella waits every day for it to be night time, because she knows it’s time to play: “She loves playing with toys that she can pull from, like ropes; she’s always waiting for us to come out and play with her between 8:00 p.m. and 9:00 pm. She starts to complain and make noises when we don’t come out, she would bring the toys and throw them in front of us and she would keep staring at us until we come play”, said Michael.

Another one of her hobbies is talking to the neighbor dog, another female. They begin barking from fence to fence, sometimes the neighbor would bark and she would answer back or vice versa, there they stay for a moment having a conversation.

This family knows that by adopting Stella they are helping out with the stray dog problematic in Costa Rica: “People have no education and prefer to buy a dog instead of adopting one, there is an overpopulation of stray dogs and mistreated dogs in this country, you have to neuter them and take responsibility, you cannot just leave a dog abandoned in a shelter and make the other person responsible when it should be you”, said Karina.

This family also took the opportunity to comment on the work done by Territorio de Zaguates: “The work they do is incredible, the time and energy that is required to manage a place like this, with all the needs they have. It’s really admirable that they can do this work, in addition to the struggle they have to go through with the people who are against the project, many people don’t understand what they do, or how they do it, but we know that they’re struggling day after day to keep the shelter alive; not everyone is up for that challenge, it means dedicating your life to it”, they mentioned. 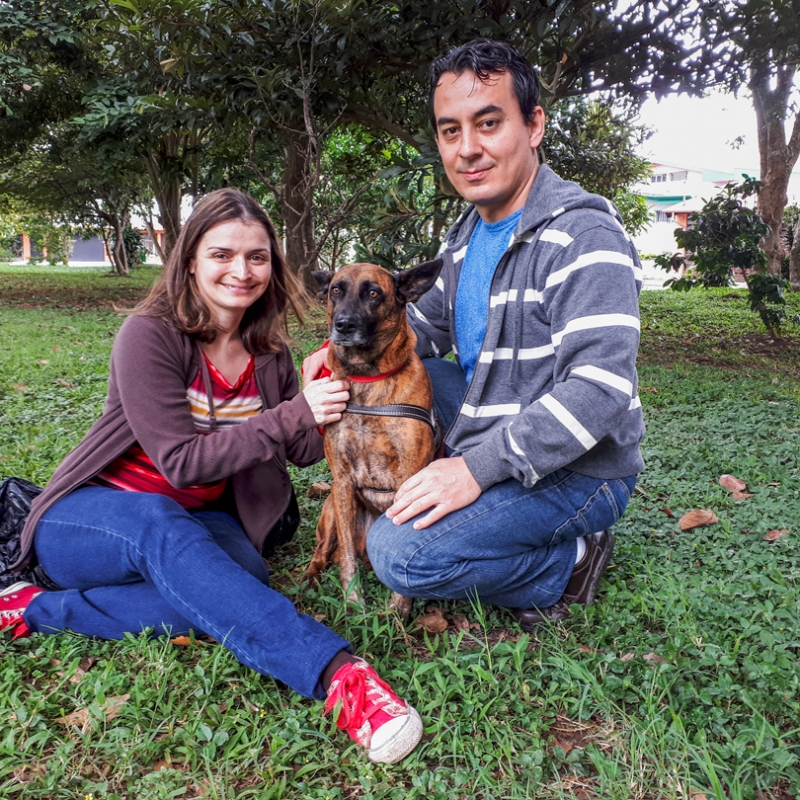 Finally, they wanted to reflect on how beautiful the experience of adopting a stray dog is, and how they recommend it to anyone, because it changes lives, you can really connect with a project like Territorio, which has a social benefit, adopting a Territorian means one less dog on the street, and one less dog reproducing out of control.

“We gave Stella the opportunity to be with us, and we are very clear that she is a living being that will keep us company for at least 10 years; we must take on that responsibility, dogs are not objects that can be returned, they are living beings that have feelings, and which will also represent an expense on your part that must be honored, “said Karina.

Here at Territorio we’re pleased to see how former Territorians can find the love they so badly need after being rescued, it is these kind of homes who chose to make a difference and bring closure to a process, putting the frosting on the cake of our work.

You can also make your contribution and help us keep rescuing dogs so they can find a forever home. Help us change a zaguate’s life.