“I wish there were no stray dogs, that would be ideal, but as long as there are, here I am to help them”

“I wish there were no stray dogs, that would be ideal, but as long as there are, here I am to help them”

Her first encounter with Territorio de Zaguates took place one day when a family member, who lives in Canada and was visiting the country, invited her to go on a hike at the shelter. María Fernanda Herrera Cambronero did not hesitate, and on that very same day, she offered her help to this project, because of the love she has for animals and the motivation of her youngest son.

“Since my youngest son loves cats, we asked Mr. Alvaro if they had any, and he said yes. There were about 30 cats in a cellar because it was the only space available for them, so I offered my help and I brought them to my house. I emptied one of the rooms and equipped it, and I kept all the cats there while we managed to build Territorio’s official cat area”, commented María Fernanda. 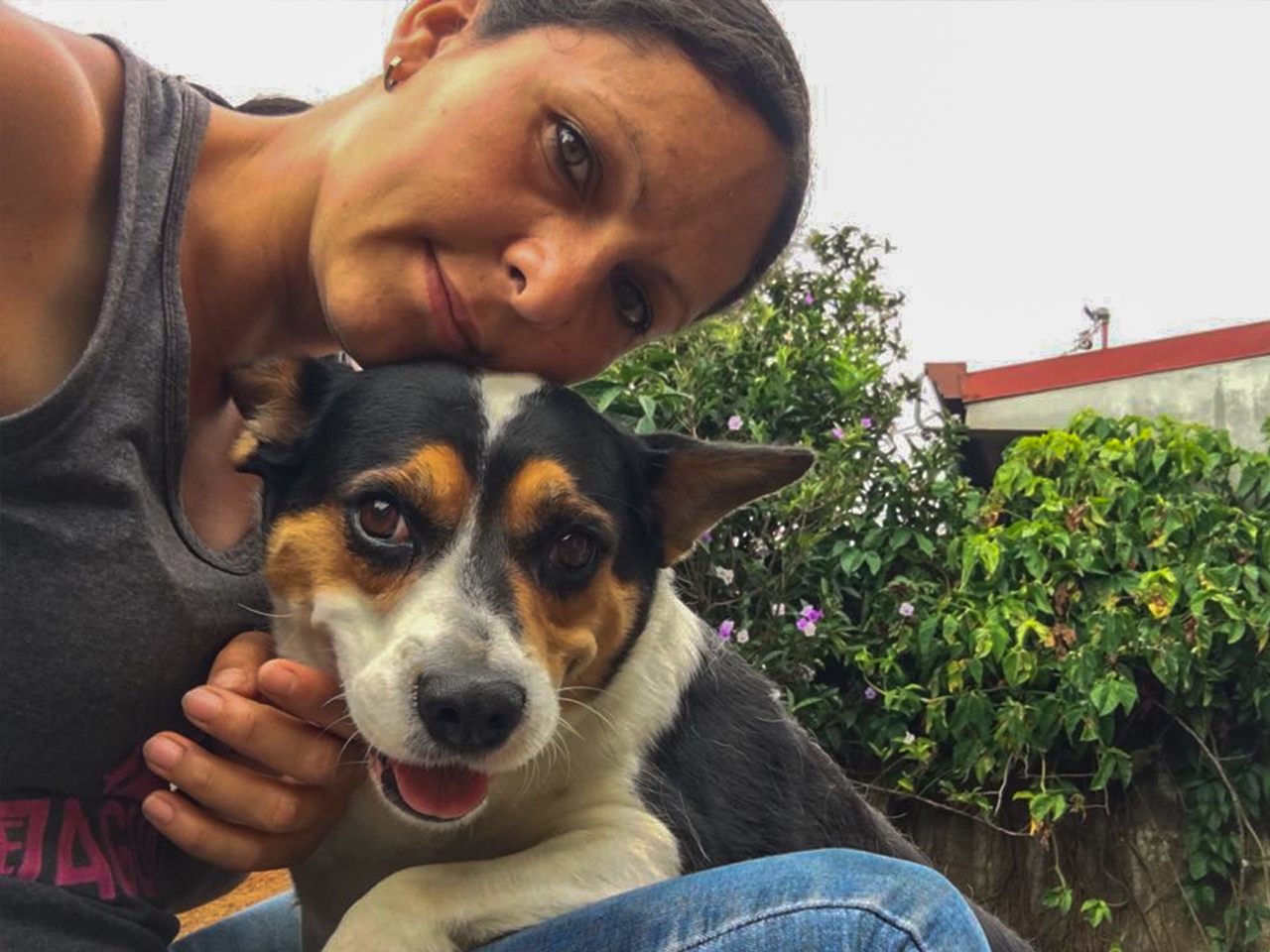 In addition to taking care of the cats, Marifer, as we affectionately call her, began going to the shelter every weekend and began the construction of the cat area. While building the new space, she managed to get several cats adopted, and fortunately only seven cats returned to Territorio in the end. From that moment on, she continued to offer her help at adoption events and opened her doors to become a foster home for Territorio.

“I started out as a volunteer, working every day and weekends. I was mainly going up there to help with the public hikes, and as time went by, I became more and more involved, and here I am, this was two years ago”,  Marifer said.

Currently Marifer works full time at Territorio, performs different tasks, including: taking care of the dogs, meeting the needs of each and everyone of them, she is in charge of the foster home, in which she has had up to 80 dogs at a time. In addition, she makes sure to provide all dogs the medications as specified by the veterinarian, and oversees the food supply, among others. 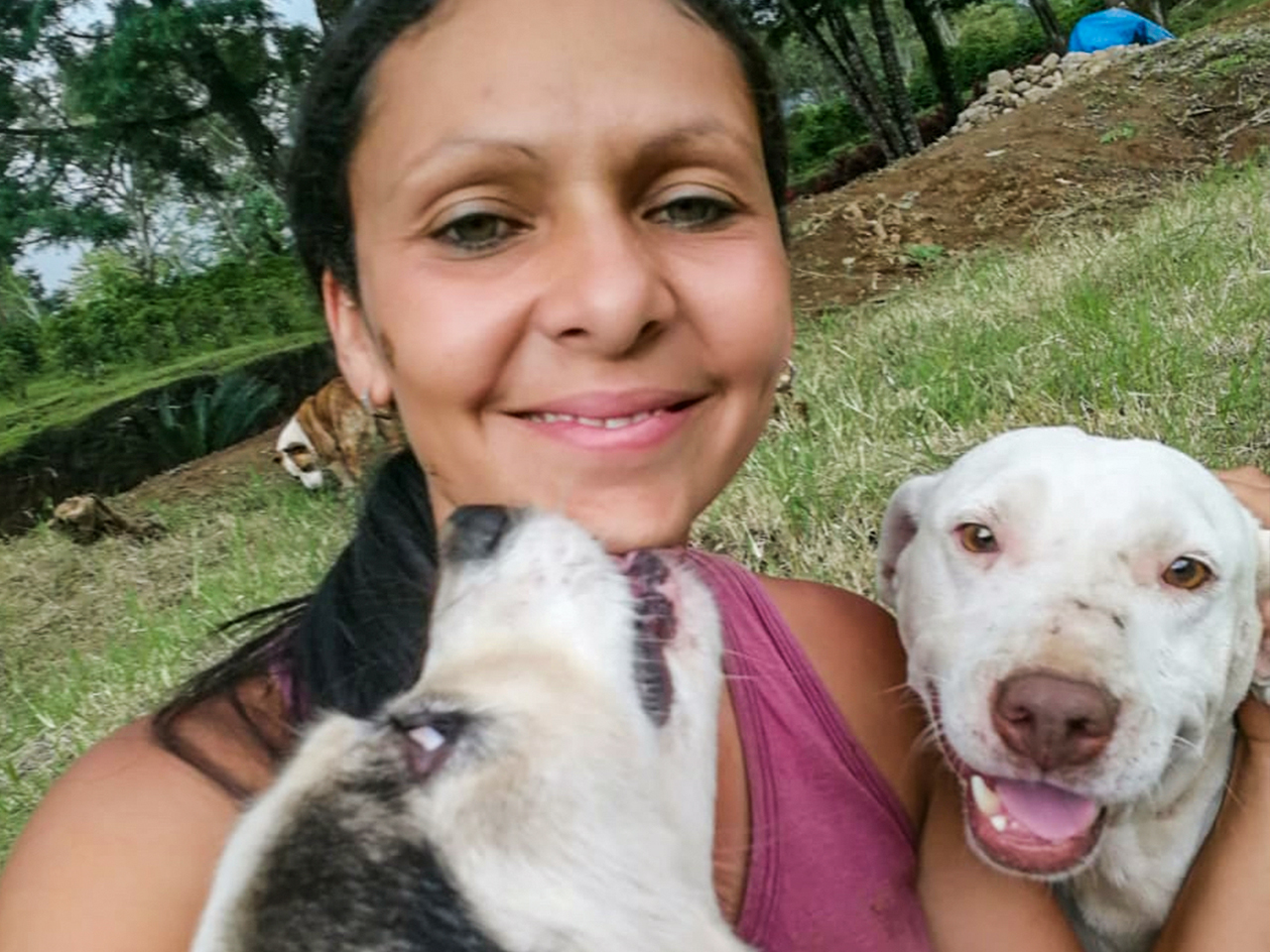 Where does your interest in animals come from?

“Ever since I was little there were rabbits, iguanas, in my room, I had a chicken named Rosita, I’ve loved animals since I was a child. I have always helped them, I have taken them off the streets and have put them up for adoption, of course, not at the level that I am now.”

“We started to spay/neuter all the cats in my neighborhood. All my life I’ve been doing the same thing, although I have had other jobs and other responsibilities, I have a fondness for all animals.”

What does Territorio mean to you?

“It’s a great deed that should not have to exist. I think that Territorio means abandonment, sadness, it’s the place where old dogs come to die, a place for mutts no one else wants, and for little mommas who’ve been thrown onto the streets. Among all the beautiful things we do during the day, and the happiness the dogs enjoy when we play with them, there is a lot of sadness behind it, that’s why for me Territorio de Zaguates has many positive and negative meanings” 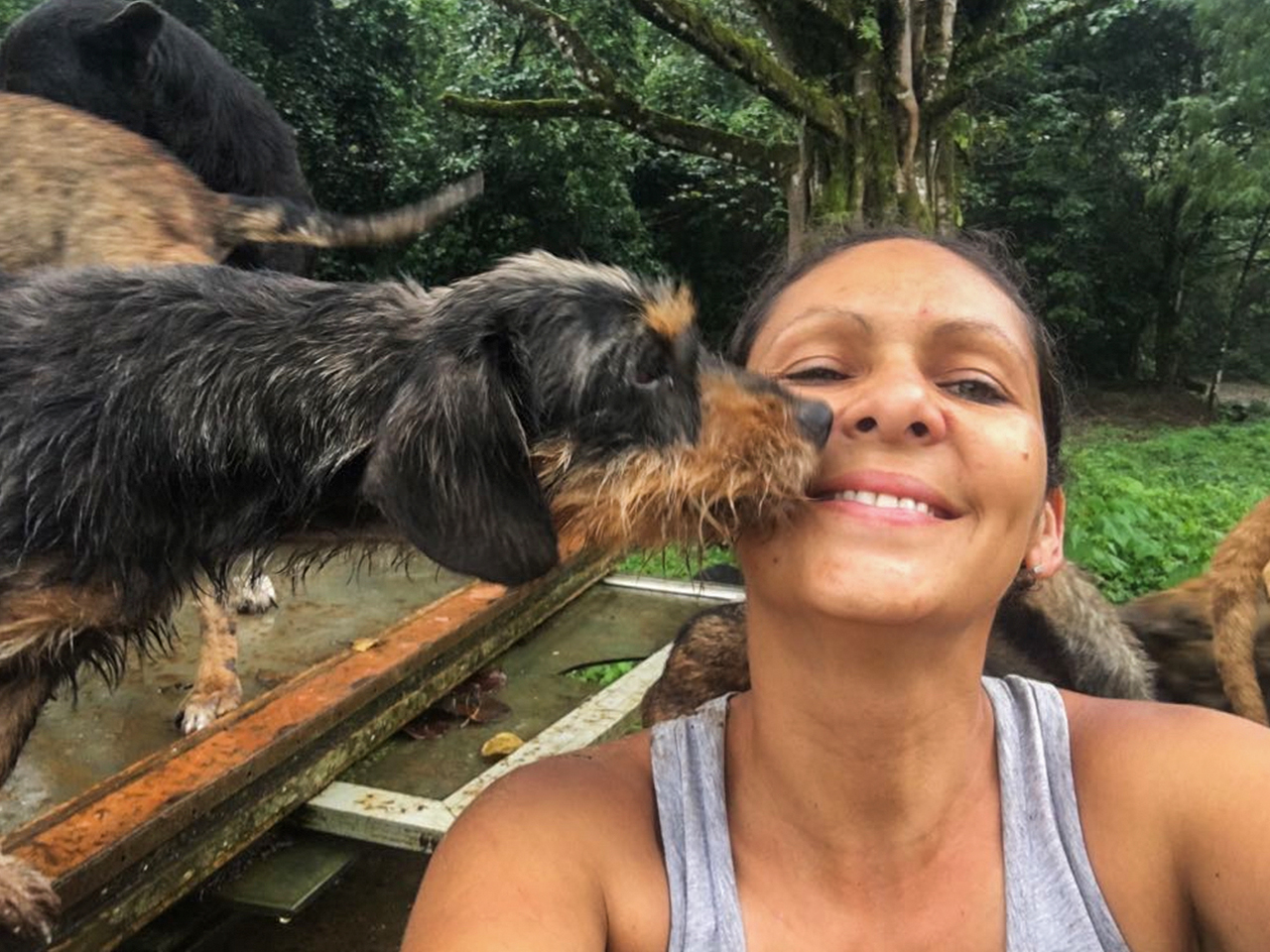 Some good aspects of it?

“It is super exciting to arrive every day in the morning and for the dogs to welcome you, to know that you are like a symbol of joy, affection and food for them. It’s very nice to see everyone running when they see you and want to jump on you and play.

You take three steps forward and you have a hundred dogs behind you taking three steps forward as well, they never get tired from being your daily companion. They go up and down the mountain with us, and if we have to go back up they do it all over again, they are inseparable. That’s the most beautiful thing there is, to come and see them so happy because they know that you made a difference”.

Do you remember any special anecdotes?

I can’t recall a specific one. I’ve been bitten, I have cried because some doggie has died on me, I have made an immediate connection with a new arrival, as if we’d known each other all our lives, those are all very beautiful experiences”. 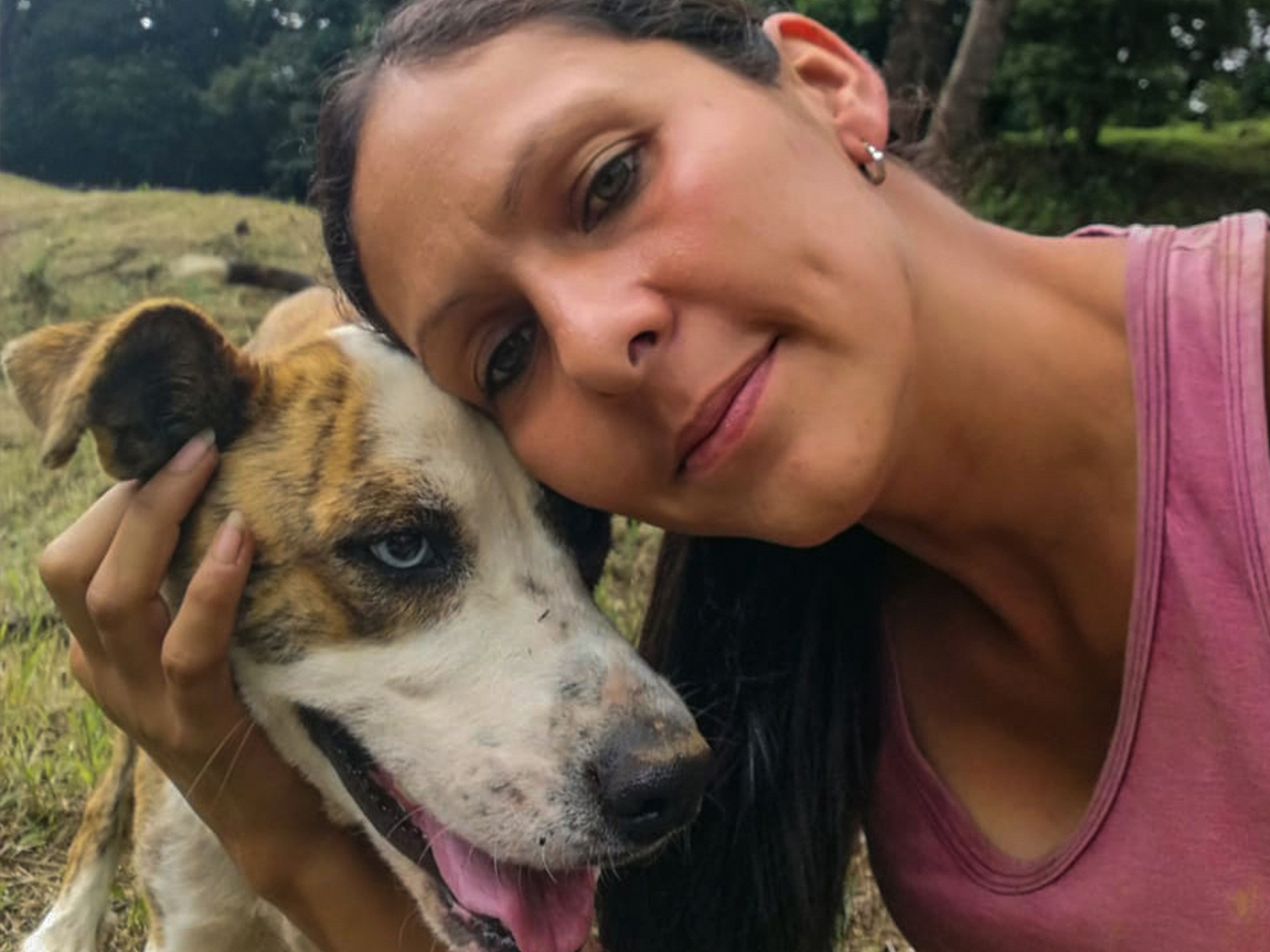 What do you think about the work done by rescuers like Mrs. Lya and Mr. Alvaro?

“It’s beautiful, it’s an experience that not every animal lover will be able to have. I think being there among so many dogs is something wonderful, but very difficult at the same time, because there are so many sad cases, because it’s sad to see the condition they’re in when they come to us after a lifetime of living in the streets. However, when you’re on the inside and you see that giant pack of dogs, and you get to know each dog’s personality, it’s beautiful, there are no words to describe it.”

“Being just a visitor at Territorio is a very nice thing, you get to see the dogs recovered and running happily, but living with them on a daily basis is actually very different. You learn to value the work that each person does there, from the boys who take care of the dogs and the enormous work that Don Álvaro and Doña Lya have done for over 10 years.”

Do you see yourself doing the same job in a few years?

“I have rescued many dogs from bad people. A while ago some very nasty fellas came over with the intention of “surrendering” their pregnant dogs, we explained to them that we couldn’t take them in because we already had so many mutts here, so then they turned around and took the dogs and threw them over a bridge, into a river, we had to run out and save them, and of course take them immediately to the vet. That is just one example of the many cases of abuse and neglect that we get here, we frequently get abandoned dogs with tumors, blind dogs and many other diseases, that’s why seeing them through their recovery and remembering the conditions they came in with generates immense joy for us.” 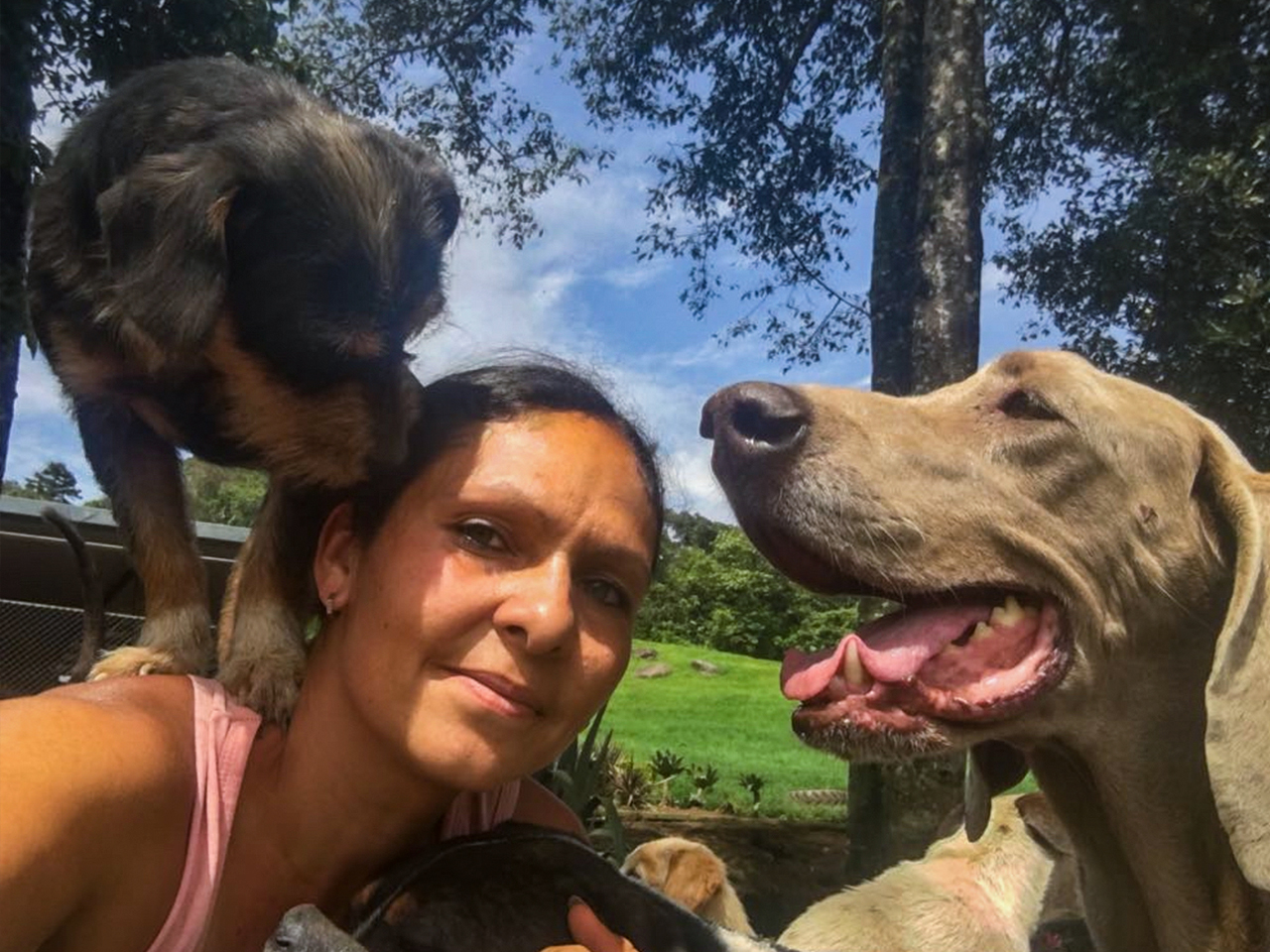 “That’s why I don’t see myself doing anything else but this. I wish there were no stray dogs, that would be ideal, but as long as there are, here I am to help them.”

It is thanks to the collaboration of committed people like María Fernanda that hundreds of stray dogs now have a better quality of life. Just like her, you can also make a difference and change a stray dog’s life.