Marcela Castro: “Territorio is a little piece of heaven on Earth for many dogs who don’t have any other opportunity”

“I’d share lollipops and ice cream cones with a little stray mutt in my neighborhood, and all the kids made a circle around us to watch the dog, named Pinta, eat the delicious treats”. This is one of the most endearing childhood memories for Marcela Castro, one of Territorio de Zaguates most involved collaborators.

She’s had this affinity for nature and animals since she was a child, as if she had a chip implanted, she’s always rescued stray dogs: “I’d take them home to my mom, and of course, she’d had to figure out what to do with them, where she’d get the money for dog food, sterilizing, etc., just because her little girl had brought a new dog home.”

The first dog she ever had was a Weimaraner named Tara, she was nine years old when her aunt gave the puppy to her as a gift. According to her, Tara was the dog that grew up with her and accompanied her for 17 years, until she died of old age.

“It was horrible, one of the ugliest moments I’ve had to go through. Tara agonized in my arms all afternoon, that was the first experience I had as an adult with a dog of my own”, said Marcela. 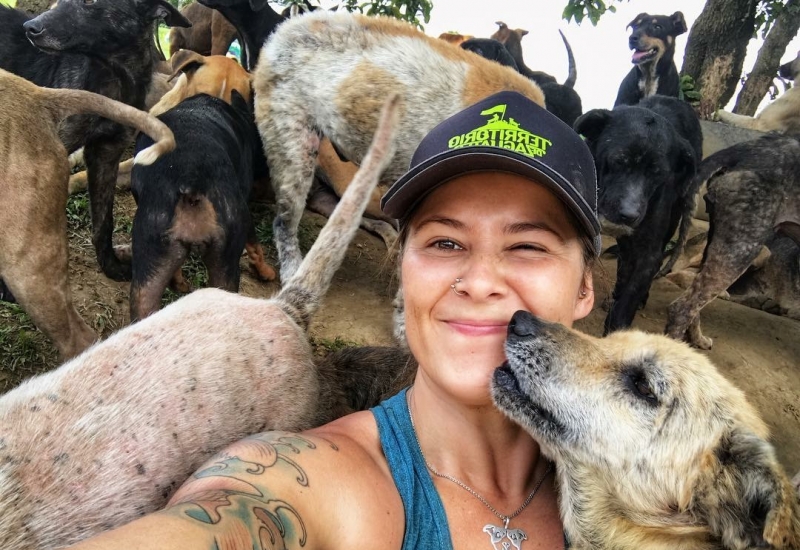 Marcela always took care of her dog’s expenses since she was a teenager. She bought her food and took her to the vet. As time went by, other dogs came along, to which she also offered her help, showing that her sensitivity, concern and desire to offer a better quality of life for stray dogs, is what defines her as a rescuer.

One day, in the middle of her rescuing efforts, she discovered Territorio de Zaguates: “I met Lya and Alvaro about eight years ago at an adoption fair. I had rescued a dog and had found a foster home for her, I took her to the adoption fair to see if I could find her a family, but no one adopted her. The girl who was helping me foster this dog could not keep it anymore, so Lya and Alvaro offered to take her in until she was adopted. As a thank you, I went to their house every 2 weeks to bring a large bag of dog food”, Marcela recalled.

According to this rescuer, the way in which she was raised, her moral values, her love for dogs, and above all, the desire to change the lives of stray dogs, is what keeps her doing this job, so for her there are no excuses or reasons that could prevent a rescue, because she knows this will be the gift of a new opportunity for a little furry guy. 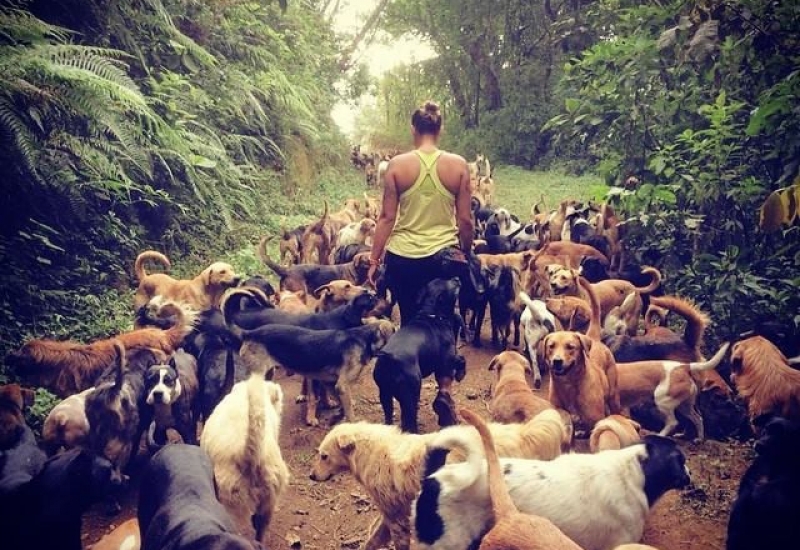 As time went on, her relationship with Lya and Álvaro grew closer and she began to get more involved in the project. She took the initiative and started taking pictures of the puppies and the dogs they had in their house, and she would then post those pictures on her own Facebook, long before there was even a Facebook Page or a concept for Territorio de Zaguates, and that’s how she got many of those puppies adopted.

Without a doubt, Marcela has always been willing to give her very best in order to see dogs happy, that is her only reward, since all the work she does, she does for free. At Territorio she has bathed dogs and trimmed their nails, she has collected poop, she has fed them, she has taken them to the vet, and has done any and every other chore imaginable. In addition, there’s been times where she’s fostered up to 17 dogs at a time in her house. Currently she has 10 dogs of her own, to which she provides a home with the care and affection they deserve. 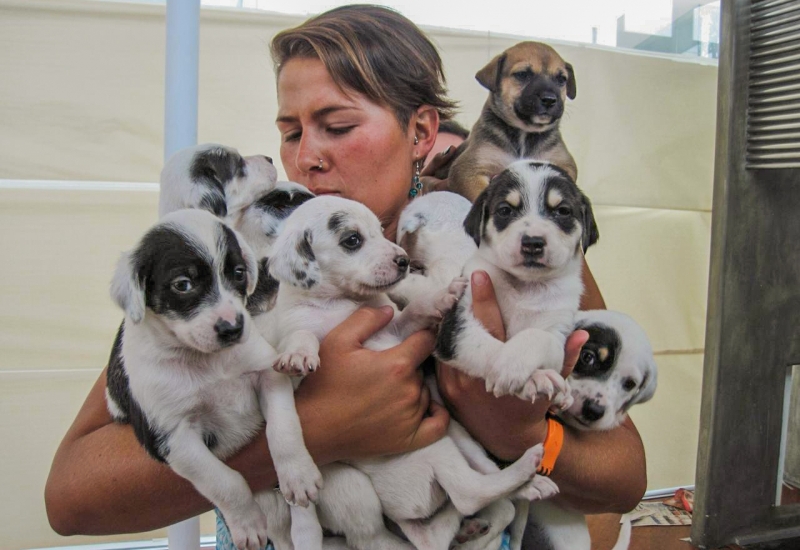 What does Territorio mean?

Territorio is like half of my life, it’s been many years, basically all my weekends are devoted to Territorio. There was a time when things got really complicated and we had to go up there every single day of the week to take care of the dogs and do all the chores, because we didn’t have anyone else who could do it.

“I feel like an aunt for these dogs, I cannot say a mom, because Lya is their mom, but for me, they are like my kids. I get happy when they get adopted, it makes me sad to see them grow old and die. Territorio is a project in which I truly believe, and it’s part of my family.”

Between your personal commitments and Territorio, what’s a day in Marcela’s life like?

“I have this dog, Puppy. She became paralyzed three and a half years ago. Lya and I take her to physical therapy three times a week, so all of our work schedule revolves around Puppy’s therapies. We both need to coordinate and have Monday, Wednesday and Friday mornings off, so we can take Puppy to her therapy, which takes away the entire morning.”

“I studied physiotherapy and I teach Pilates and Yoga. Fortunately, I am my own boss, which allows me to do many things that I could simply not do if I had a fixed schedule. If I need to cancel a class for something related to Territorio I can just cancel it. For example, we use Fridays for running many errands that cannot be done during the week, whether it’s buying dog food, collecting a donation, taking a dog to the vet; and weekends are for going up there to the shelter or going to adoption fairs, we’re always running.” 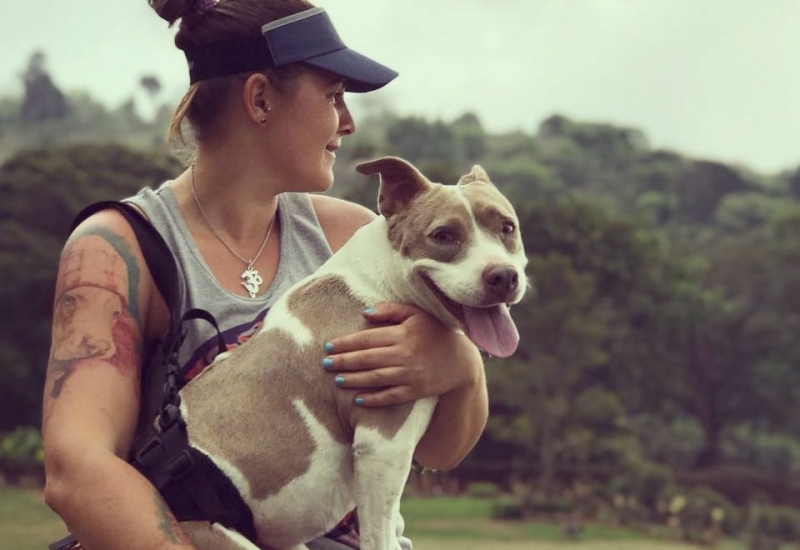 As a collaborator, what role do donors play in Territorio?

“At this stage we’re in, I am sure Territorio could not survive if it wasn’t for the donations. When I met Álvaro and Lya, they were financing Territorio out of their own pockets. Álvaro had a business and some places that he rented, but as time went on, the amount of rescued dogs increased and the money just wasn’t enough. They had to sell their business, then mortgage their house, they resorted to anything they had left.”

“Super Perro is great help, if it wasn’t for them we wouldn’t be able to feed the dogs, even though we still have to invest millions in food every month, Super Perro donates 50% of it, which is a lot. It wouldn’t be possible to keep Territorio open if it wasn’t for the people who help us through donations, because it’s not just a matter of having the space to do this. The land is indeed very large and you could have 3000 dogs here if you wanted, but there are many expenses that people do not take into consideration, it’s not just the food, it’s the payroll for our live-in staff members and other collaborators, endless bills from sterilizations, veterinarians, vaccines, among others. Fortunately, the donors keep the shelter open.”

What would you say to Lya and Álvaro?

“I would say thank you for doing the monumental job that nobody else is willing to do in this country, that I admire them very much, because I have seen them lose everything they had in order to keep their dogs and Territorio open”.

“Too many times I’ve had to watch people criticize them, make up ridiculous stories about them, and I am sure that no other person in this country is capable or willing to lose everything they have lost; it has taken a toll on their lives to maintain Territorio afloat. I am sure that neither of them, if given the choice, would choose anything different, again and again they would do what they are doing”. 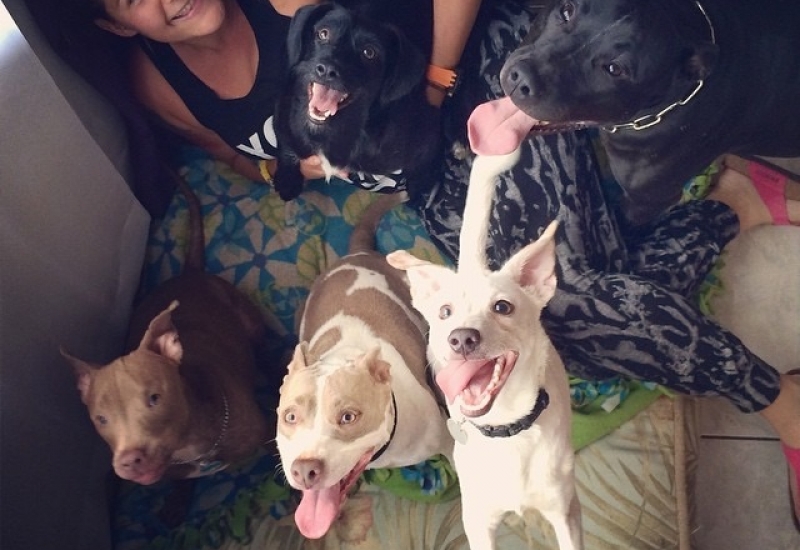 If you had to give a message to people about Territorio, what would it be?

“I’m always the one telling people to please don’t come and leave your dog here, this is not a five star hotel, it’s a shelter for stray dogs that have no other option than the streets, it’s true that here the zaguates are happy, they can run down the mountain and they are in good hands, but if you bring your dog, who is used to living inside a house, to a mountain in a tropical country, where it rains, where there’s mud everywhere and other animals, your dog will probably not have such a great time.”

“Of course Territorio is a little piece of heaven on Earth for many dogs that don’t have any another opportunity, but unfortunately, sometimes it ends up being a garbage dump for dogs who previously had a home and their owner just didn’t want them anymore, and it shouldn’t be like that. In the end, many dogs might have a great time here, they fit right in with the pack, but some other times we see dogs being dumped here, who immediately get depressed and die.”

“Territorio is a very humble family, but we try to give the very best to the dogs, give them a roof over their heads, food, veterinary care; it’s not possible to individually give love to more than 1000 dogs a day, but our staff here treats them with care and respect and it changes their life completely. Territorio should only be a nice temporary home for dogs, so that the purpose would be getting them a family, because I can assure you in the end that’s what everyone wants: a home, a family, someone to love and be loved by, and maybe, give them a toy for Christmas”. 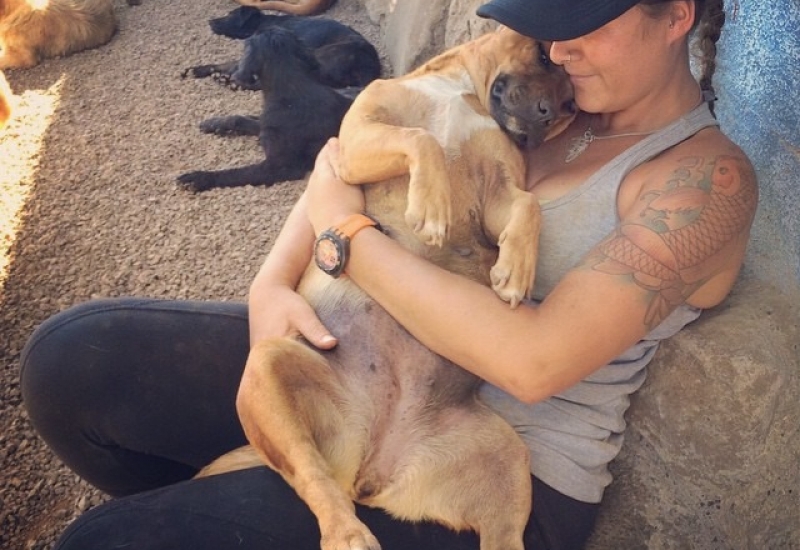 What are your future plans with Territorio?

“There are very difficult and stressing times that we go through, because it’s not only the dogs, it’s the economic part. You have to keep figuring out ways to get the money to pay the bills. It’s hard knowing that we have, for example, a $10.000 bill pending at some veterinary clinic, and that we’re not allowed to take any more dogs there until we pay this bill.”

“On the other hand, we have to deal with people who mistreat and abandon animals daily, which is all very emotionally exhausting, it takes a toll on you and there are times when you think about leaving everything behind, doing what you want, instead of being up here at the shelter, but as I told you before, Territorio is my family, and for me, leaving is not an option. I can’t just pick up my things and leave without ever knowing if Abuelo died, or if Bella is still at the shelter, or what happened to Cherry. I just don’t have the heart to leave a project like this because they are already part of my life and my family; we have to keep going for the dogs, they are not to blame for anything, they deserve we stay here trying to improve their quality of life.”

Unfortunately, there are more and more abandoned dogs each day that need the help of people like Marcela, who have given their heart and life to the rescue and care of stray dogs that have experienced cruelty and human indifference.

You can also join in and be a Territorio collaborator. Help us continue to maintain this little heaven on Earth for many stray dogs that have no other option but the streets.