He was thrown into the streets like he was garbage. Despite this, Bolitas’ tenacity was a key element for not giving up and beginning his battle against a life threatening cancer.

Our protagonist was rescued from the streets on January 21st this year, in a critical state. At the time, his body was completely covered in little balls, hence the name “Bolitas” which means “Little Balls”. What we didn’t know was that those little balls were actually tumors that were rapidly ending his life.

They say he had a family, but as soon as those little balls started sprouting all over his body, instead of helping him and providing the proper care he needed, they abandoned him. 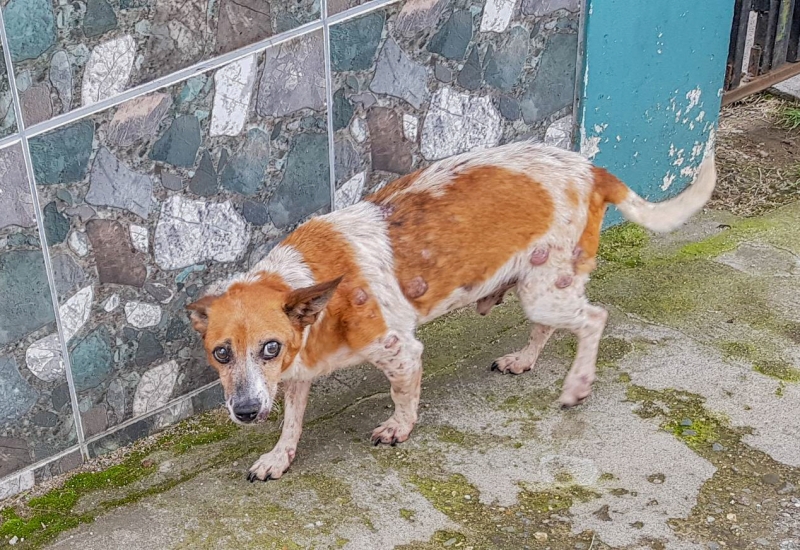 While this little guy was figuring out how to survive on the streets all on his own, scavenging for food and struggling against weather conditions, his health began to deteriorate more and more, until one day, some people that had already seen him around decided to finally contact Territorio asking for help, due to the growing amount of tumors in his body.

Fortunately for Bolitas, his life conditions improved dramatically right after arriving at our shelter, where he started receiving the proper care he required, and thanks to this his situation started changing gradually.

“The very next day after we rescued him, we took Bolitas to the Vet for a check-up. He had surgery right then and there, to extract the 3 biggest tumors he had, and the specialist said that there was not much else to do for him, because it was too late and his body was covered in tumors.” said Eneredis Carrillo, a Territorio colaborator.

Despite such discouraging diagnosis and the result from a biopsy that confirmed Bolitas suffered from skin cancer, we never let our guard down at Territorio, and we chose to wager on this little guy, in an attempt to stand by him and try to extend his life, even though the future ahead seemed hopeless for him. 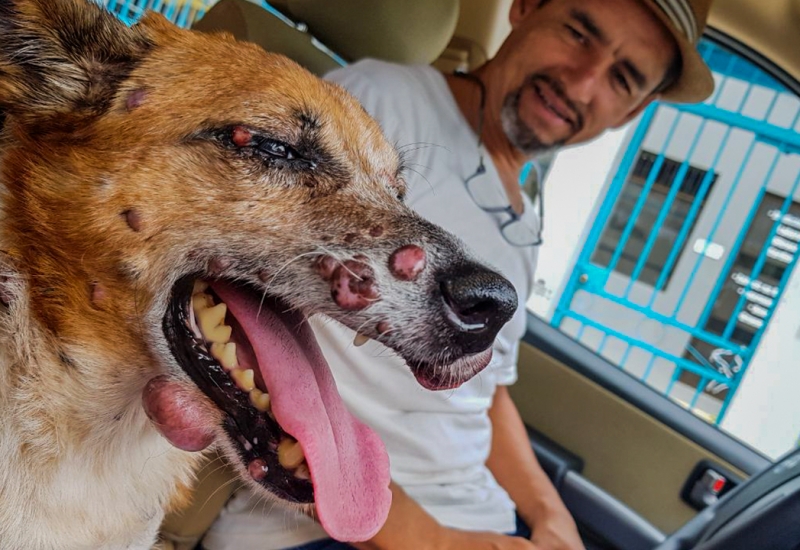 We immediately started Bolitas on an injectable chemotherapy treatment, but it did not work and the tumors actually began to grow faster. Some of those tumors were bursting with blood and pus coming out of them, but they couldn’t be removed because there were so many of them.

After not showing any signs of improvement, doctors decided to change the treatment to pills and fortunately this began to change his live completely.

During those first days, this warrior attended the clinic once a week, but as his body began to react positively and did not present any side effects to the pills, the visits were scheduled every 15 days. As time passed by, brave Bolitas gained more strength to move forward and keep fighting against cancer. To this day, this zaguate sees the doctor once a month, to monitor and keep everything in control, and rule out the recurrence of tumors. 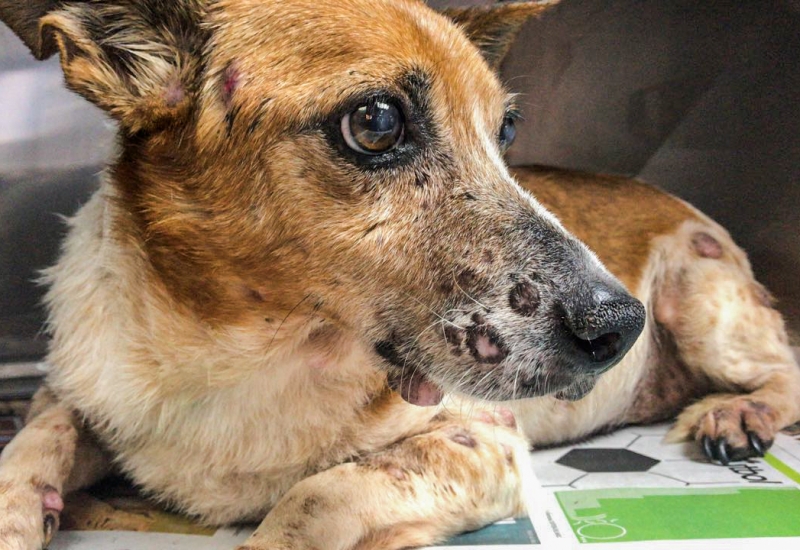 “I had the opportunity to treat Bolitas, who with the support of many people and entities, and the great work that Territorio de Zaguates does, has allowed me to treat his skin cancer (cutaneous mastocytoma). He is currently a cancer survivor and is in remission (without symptoms of disease)”, said Dr. Carlos Coto, a veterinarian who assists him.

Thanks to the treatment, Bolitas hasn’t had to undergo any other surgeries and his health condition is stable. The medicine he keeps taking, as well as the constant appointments with the veterinarian, are surely responsible for this furry guy being a cancer survivor.

Unfortunately though, the future is uncertain for this little one, as the pills he needs to take daily are not sold in our country. From the moment chemotherapy began until today, this medicine has been donated by the veterinarian who treats Bolitas, and he only has treatment left for one more month.

“The difficult thing now is being able to get this medicine. So far the doctor has been kind enough to provide it for him, but he just ran out of it, and we’d have to get it all the way from Europe now, if we hope to keep treating him, because there is no way to get the medicine here in the country or even our region”, said Eneredis. 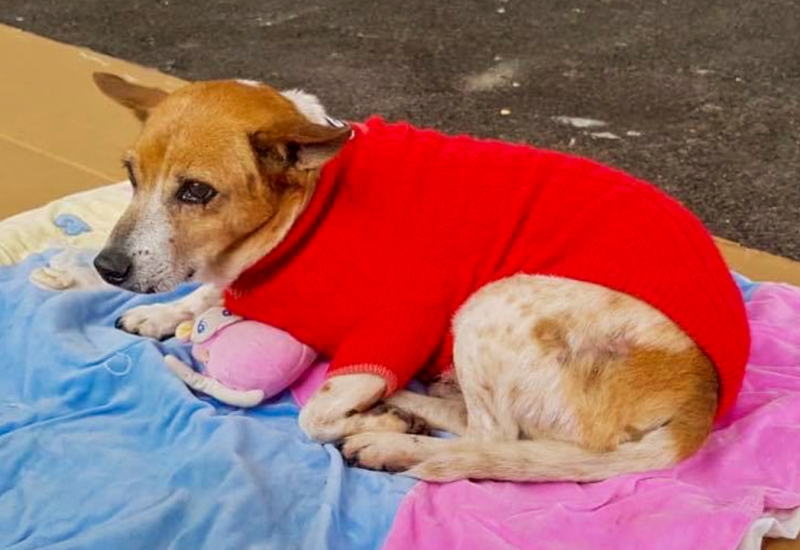 For now, the doctor will provide a prescription to try to get some generic medicine, because if Bolitas stops using it there is a possibility that the cancer will reappear.  Meanwhile, this brave zaguate continues to enjoy his days to the fullest amongst his dog friends at Territorio, and does not for a moment, back down in his struggle to survive. The only thing we remember about his past is his first name: Claws.

This little warrior has approximately 15 years old, he is already a senior dog. However, his joy and good attitude towards life are the engine to cope with all his health problems. Thankfully, his body has had no side effects from the drugs he takes for the chemotherapy and liver treatment.

For now, Bolitas will continue to enjoy the walks around the property and the food, two of the activities he enjoys the most. In the meantime, we are looking for a solution to continue using the pills he needs, to keep under control this cancer which almost took his life. 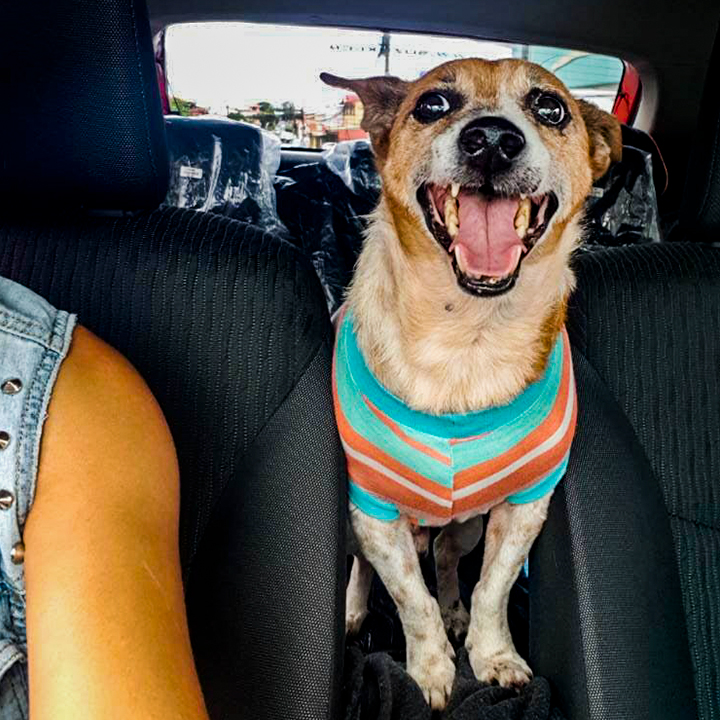 We encourage you to become a godfather or godmother to a zaguate like Bolitas.