Chocoleta, better known as Choco, was one of those neighborhood strays who loved chasing cars and motorcycles around. One day, a motorcyclist was riding through one of the streets she used to frequent, and as usual, she started barking and chasing after him. The man, in the midst of both fright and anger, decided to get revenge, so he called one of his friends, who was also riding a motorcycle, and decided to wager on which of the two would kill the dog first.

They cornered Chocoleta and started torturing her. Although she was able to dodge the motorcycles a few times, the heartless men fractured part of her spine, which caused her to lose all mobility on her hind legs. 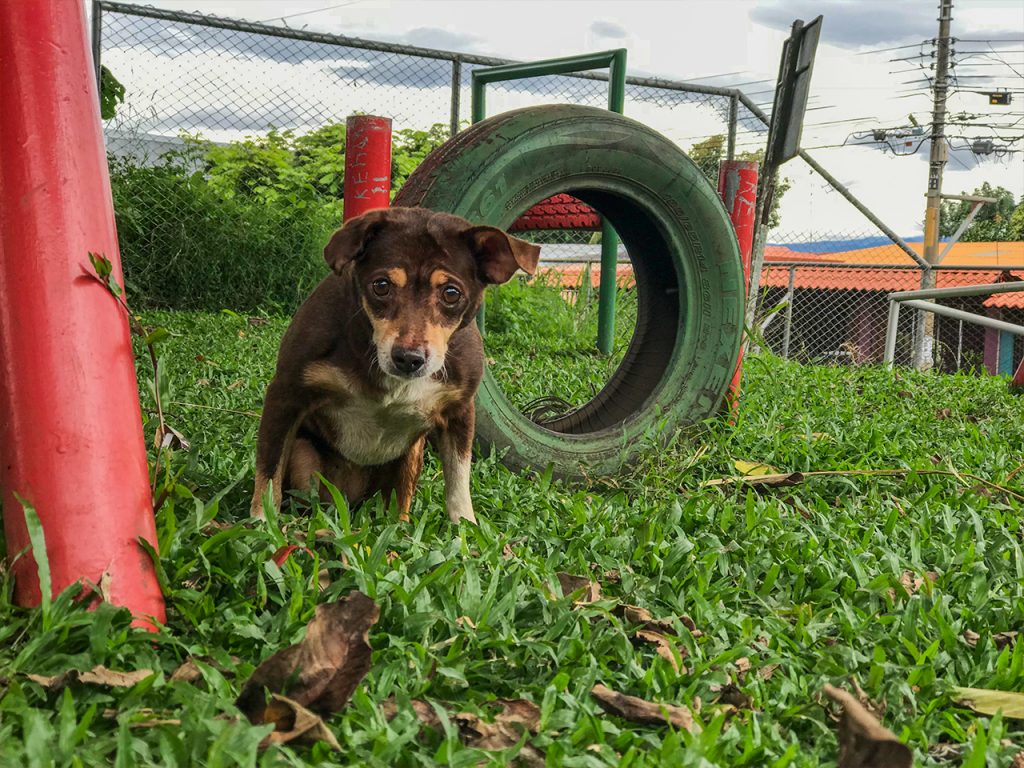 As she couldn’t move and was suffering, a merchant from the area who saw what was happening came running to her rescue, fortunately he was able to protect her from the bikers, who were getting ready to run her over again and kill her, once and for all.

The merchant took the wounded dog to the sidewalk, but didn’t know what to do. Some women passing by saw the man and poor Choco, and decided to call Territorio de Zaguates for help. Territorio’s team immediately traveled to the location to provide the necessary help.

She could not walk and her health was in critical condition, so some people thought the best option was to put Choco to sleep. The story took a turn when Lya Battle, co-founder of Territorio de Zaguates, met her. 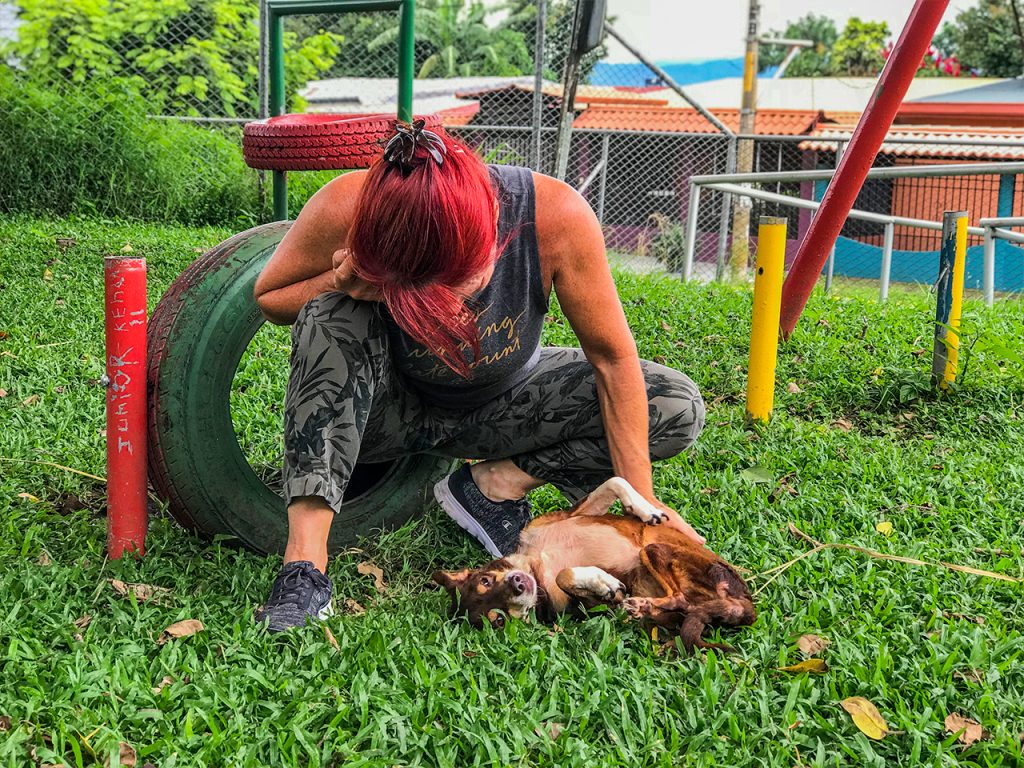 “When I went to meet her, her hind legs were no longer working, but she was full of life and she stared at me with such expressive eyes; she was not ready to be put down, that’s why she stayed with me” commented Lya.

This furry one received Acupuncture therapy to try and regain some mobility on her legs, but his was not possible because Choco’s spine was severely damaged from the motorcycles’ impact.

Despite the cruelty in those men who tortured Choco, and all the bad experiences she had to go through living in the streets, this little one stands out for being brave and proud. Our tenacious little girl shows that her will to live prevails in spite of adversity. 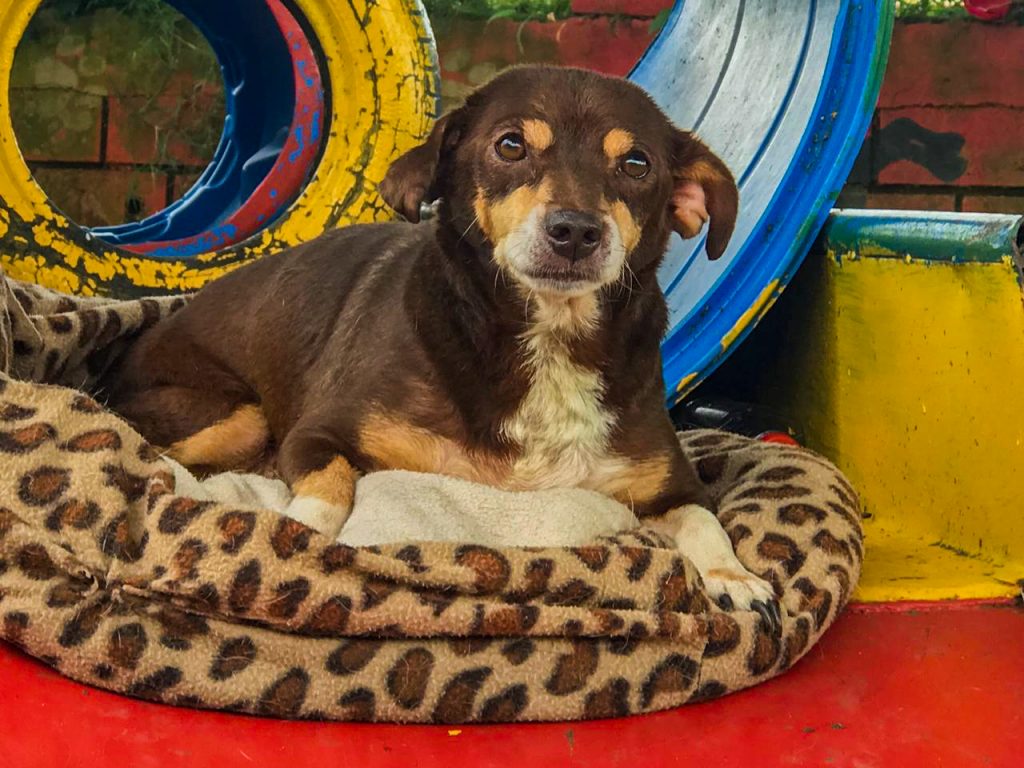 Today, as an adult dog, Chocoleta still has an enormous will to live. Her paralysis has never been an obstacle for doing what she wants and for defending herself, Lya said: “Seeing her personality today, at old age, it’s very possibly to think Choco was a very feisty one when younger, because she won’t take any BS from anyone, she will chase any dog if she has to, as long as they don’t touch her food, she moves by hopping, she’s never lost the disposition to face life, if she has to climb a ladder she manages to do it, if she has to climb back down she does it, she fights against obstacles”.

On the other hand, Lya said that Choco never liked using a wheelchair, and that she always preferred hopping around. In addition, this little princess is a huge fan of clean beds: “you always have to have a clean space for her, there is nothing that makes her happier than to wallow in her clean bed and clean blankets, otherwise she doesn’t even come close”.

Just like Choco, there are many stray dogs on the streets that need to be rescued. We continue striving to provide each day a second chance to all mutts and strays victims of human indifference.

We know that behind each new opportunity, there’s people donating for a dog to have a better quality of life, this is why we invite you to join us, so that together, we can continue rescuing those dogs who desperately need it.